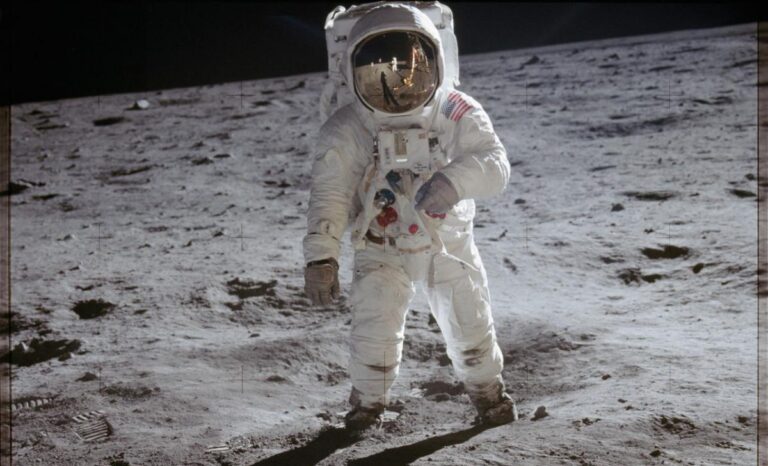 The moon, the workplace and the good news of Jesus

In the first two articles we considered 1) How work is a gift from God (giving humans great dignity)? and 2) Why is work toilsome? This article sets out why we believe the third part of our statement: Ministry in the workplace is critical to support Christians in what they do for the majority of their week, because the workplace is also a public square—many people don’t go to church but they do go to work.

When Neil Armstrong first set foot on the moon he famously remarked: “That’s one small step for man, one giant leap for mankind”. In these few words a specific local event and its universal significance are combined into one statement. A local physical movement of a human foot, is given a universal significance. The NASA team had landed astronauts on the moon, in the moon’s specific atmosphere, weather, constraints and location—a specific localised occurrence. At the same time the local event had a broader perspective: humans had expanded their frontier to outer space! Humans were off their home turf (Earth), and on another astronomical body. Yet, just because NASA landed on the moon, it didn’t mean that the next week they were landing on another astronomical body, say Mars. Mars is different, it’s further, it has different local conditions. A landing on Mars means a different set of issues need to be considered and answered—though certainly some of the learning from the moon landing would be helpful.

The story of the moon landing illustrates the simple point: while a local event (landing on the moon) can have a universal impact, there remains a tension—the universal impact cannot be applied universally in a flat, copy-and-paste way. This is why workplace ministry is critical, it brings the good news of Jesus into many the different landscapes and conditions of the public square—and outside the church building.

This is the third and final piece which expands on our third statement related to ‘work’—but more specifically work-place ministry/mission.  It explores the dynamic of the local versus universal with interest in the workplace. The issue can be framed in other ways that we are very familiar with (though all aren’t purely equivalent):

The argument here is very simple and not ground breaking, though it is commonly overlooked as we attempt to simplify the great complexities in life.  The argument here is that: both the local and universal issues; centralised and decentralised; movement and institutional dynamics are important—overemphasise one to the detriment of the other—and the paradigm becomes reductionistic. If we become reductionistic, we embrace an unworkable fallacy that leads us into a myriad of problems. There is a sweet spot however, where both sides of the tension coexist, to the benefit of the other.

A helpful book which considers the interplay between movements and institutions, and the benefits that each bring, is by Hugh Heclo, called On Thinking Institutionally.[1]  Heclo argues that characteristically institutions promote stable patterns of behaviour through the implementation of rules and procedure that are fairly traditional—so change and adaptation tends to be slow. Such a framework tends to limit people’s choices, practices and opportunities to respond quickly and in a spontaneous way. But the good of institutions is that they embed practices and truths that a group are settled on, which aids stability. These practices can be an effective way to bring order so that an organisation can devote more energy to other new and creative things. A positive of institutionalisation is that the path of smooth succession planning is clearer. Whereas movements can quickly spring up, but when they are dependent on just a few key people, once these people are gone the organisation and vision is lost—and consequently, so is the movement. A helpful distinction is that “movements don’t have members, but they do have participants....Movements are made up of people committed to a common cause.”[2]  Both sides of the tension have their strengths.

The sweet spot, or balance of emphasis between a movement and institution, will also change depending on the purpose of an organisation. For example a franchise model, like McDonalds, works well when the business relates to people essentially as consumers.  The business goal in such a case is to have a product that people will consume over and over again. In this system there is minimal relationship between consumers and the workers in the McDonalds. We are in and out, getting the products we want, as fast as we can (after all it is called fast food). Ministry built on a franchise model will over simplify people, reducing ‘people’ into a single common denominator that can consume exactly the same suite of products. However, Christian ministry is not about dispensing religious goods and services that are to be consumed. “Ministry”—by definition is an act of service (and service in the biblical sense, not the business sense)—which therefore requires a shared relationship between those involved. An example of ministry in this sense is the apostle Paul who wrote to the Thessalonians:

Because we loved you so much, we were delighted to share with you not only the gospel of God but our lives as well

Work place ‘ministry’ involves those who know Jesus making the steps into their work places—where church pastors cannot tread Monday-to-Friday. Work place ministry is therefore ‘local’ centric. It’s these local ‘moon surfaces’ where followers of Jesus make the step into, on behalf of his universal claims of love and authority—to unique people in a specific workplace terrain. Seeking to bless the workplace is a very fitting focus because the opportunity for very regular interactions, which can facilitate deeper relationships, is so great—and this is the very key ingredient needed for personal service which can be felt and non-superficial.

As Engage Work Faith partners with those in the workplace, it is the local emphasis that impacts how we approach the task of supporting people in bringing the kingdom of God to work in practical, articulate and winsome ways. This means listening to the needs of the people in South Australia, finding solutions and ideas that are practical within this specific local context. Emphasising this local approach isn’t just a preference for Engage Work Faith, but critical to model to workers who need to adopt the same approach for their workplace. We think good mission has its eye on God’s glorious transforming message in the person of Jesus for everyone around us, and less focus on the programs or the latest techniques.

An approach that gives a ‘universal’ emphasis, can tend to be programmatic, forced, and turns people into consumers of specific products. Yet to love and serve people around us requires ‘knowing’ the person so well, that we know what makes them tick, their hopes, their dreams, their disappointments, and the stories that define them. This type of knowing is achieved by individuals who have invested in the people around them, and so have the ability to connect the good news of Jesus to those they know, in ways that are personally effective. We can see such an approach in scripture. In the book of Acts the church grows as the Word of God is heard by individuals and groups, who then spread it through their relational networks. There is little institutional support or control, the emphasis of the spread is through local relational networks. This emphasis on the local isn’t absolute however. When conflict occurred the specific issue was brought to Jerusalem and resolved by a council of Apostles (Acts 15). So the centralised and decentralised tension is nothing new—the importance of both is there from the beginning. This is why good governance and structure is important to us as well as accountability to a board and our strong partnership with local churches.

Engage Work Faith therefore sees our role in presenting the universal truths about God, in ways that connect specifically to people in the workplaces of our state. We seek to understand the local people, the issues faced here, and how Jesus connects to them. The approach is an organic, self-propagating, localised emphasis of ministry that builds a network of people for encouragement of service within workplaces.